There are no shortage of female foodie’s making their mark on the culinary scene at the moment. Izy Hossack is just one of a number of talented women who began by channelling her love for all things food (and cinnamon) through her successful blog Top With Cinnamon.

Dubbed the new Nigella by The Times, Izy who is only 18 is continuing to bake up a storm with the launch of her very first cook book, also called Top with Cinnamon. Her collection of stylish sweet and savoury recipes in her new book showcases not only her cooking skills but also her photography and artistic abilities.

From chocolate & banana French toast, to sweet and sticky pork as well as Dutch apple cake, this gorgeous book includes recipes which will take you from breakfast, right the way through to dinner, with some delicious treats in between.

Having received a copy of Top With Cinnamon from Hardie Grant Books I delved straight in, putting the pumpkin gingerbread to the test. This is undoubtedly a taste of autumn, perfect as the leaves begin to turn gold and the temperature begins to drop a few notches. Rich and moreish, a distinct smell of Christmas will waft through your kitchen. It won’t disappoint.

1. Begin by pre-heating the oven to 200C. In a pot on a medium heat, gently melt the butter and stir in the sugar, syrup and molasses until the butter has melted.

2. Remove from the heat and stir in the cinnamon, cloves and ginger as well as the bicarbonate of soda. Beat in the egg and pumpkin and stir in the flour before pouring the batter into a greased 2lb loaf tin.

3. Bake for 55 minutes at 180c and leave to cool for 10 minutes before removing the gingerbread from the tin.

Grow Cook Inspire is on the road & tomorrow we’re heading to the RHS Chelsea Flower Show, taking place in September for the very first time. Never has gardening been so important for our mental health and the health of our planet, and with an additional 3m more people gardening the show really has an engaged audience. The stage is set. And it’s set to be fantastic.🌸🌻🌱 What I can’t wait to see (other than pumpkins, dahlias & verbena);
From Glasgow to Chelsea Flower Show to see @ocean.plastic.pots debut, via @dahliabeach. 🚗 🌸 #rhs #rhschelseaflowershow2021 #rhschelseaflowershow #dahliabeach #milletsfarm #dahlias #pyo #greenfingers
Friday flowers 🌸 It’s going to be all dahlias & pumpkins next week as the greatest show on earth takes place in September for the first time ever. Buzzing for @the_rhs 💚🌱💚#rhschelseaflowershow2021 #fridayflowers #greenfingers #rhschelsea #dahlias #pumpkins #growyourown #mindfullnessgardening #cutflowers
Encouraged my wonderful gran, to jump on board the dahlia bandwagon this year. I gave her these beauties from @farmergracy for her birthday in February as tubers and they have done so well. But this lady is a green fingered whizz! 💚Her tomatoes are legendary. #dahlias #greenfingers #scottishgardens #farmergracy
Peak of the week, most definitely harvesting four of our home grown Crown Prince pumpkins. The tastiest and most delicious culinary pumpkin you will ever get your hands on!! 🌱🎃 #crownprincepumpkins #patchtoplare #pumpkinrevolution #scottishpumpkins #pumpkinpatch #kilduffpumpkins #growyourown #greenfingers #kidsinthegarden #getkidsgardening #kitchengarden #latesummer #sarahravenseeds #scottishgardens #growcookinspire
September means only one thing, the kids and Geoff are going to be eating a lot of pumpkin between now and the end of the month as recipe development gets underway for @kilduff_farm 🙌🎃 #kilduffpumpkins #patchtoplate #pumpkinseason #eattheseasons #seasonalingridients #recipetesting #scottishpumpkins #scottishfarming 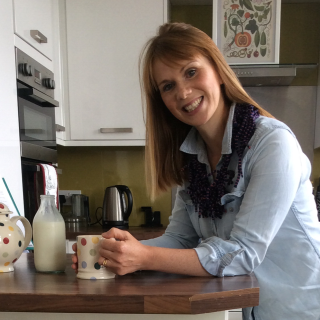 A mum, fuelled by coffee, enthusiastic about gin, stirring up homemade memories in the kitchen, developing recipes to encourage children into the kitchen & championing Scottish farming|| Copywriter, food & drink writer || Was in Edinburgh, then London and now in Glasgow with my growing brood.